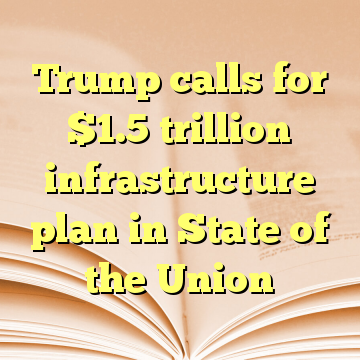 (Worthy News) – President Trump asked Congress on Tuesday to pass an infrastructure package that would ultimately be worth $1.5 trillion, increasing the amount of investment in infrastructure over what he requested of lawmakers the last time he appeared before a joint session of Congress.

“Tonight, I am calling on the Congress to produce a bill that generates at least $1.5 trillion for the new infrastructure investment we need,” Trump said during his first State of the Union address on Tuesday.

“Every federal dollar should be leveraged by partnering with state and local governments and, where appropriate, tapping into private sector investment — to permanently fix the infrastructure deficit,” Trump said. “Any bill must also streamline the permitting and approval process — getting it down to no more than two years, and perhaps even one.” [ Source: Washington Examiner (Read More…) ]