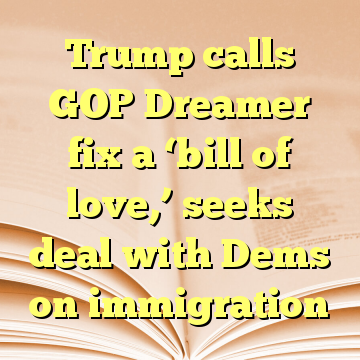 (Worthy News) – At a meeting Tuesday with bipartisan members of Congress, President Trump said the fix to the soon-to-expire temporary amnesty for “Dreamers” would be a “bill of love,” but stressed that tougher border security must be part of the deal.

“We have something in common. We’d like to see this get done,” Mr. Trump said at the sit-down with more than two dozen lawmakers, trying to strike a deal that would settle the immigration impasse that threatens to cause a government shutdown next week.

The president said House Judiciary Committee Chairman Bob Goodlatte, Virginia Republican, would soon introduce a bill that addresses the plight of so-called Dreamers, illegal immigrants who were brought to the U.S. as children.