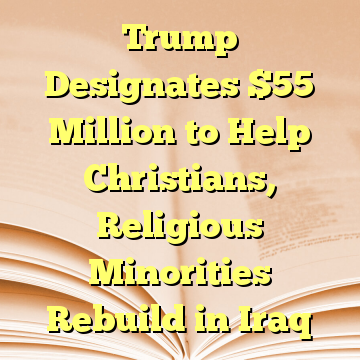 (Worthy News) – In the wake of Vice President Mike Pence’s announcement last October that the United States government would provide direct aid to persecuted Iraqi Christians struggling to rebuild following the liberation of the Nineveh Plains, the Trump administration has taken concrete steps to follow through on its promises.

Trump’s administration announced that it has renegotiated an agreement with the U.N. to ensure that vulnerable Christians, Yazidis and other religious minorities victimized by the Islamic State in Iraq will get the U.N. assistance they were previously denied.

The administration has also announced that it’s accepting proposals by private organizations on the ground in Iraq to receive direct assistance from the U.S. government to rebuild the ancestral homelands of Christians and other minorities destroyed by the jihadi death cult. [ Source: Christian Post (Read More…) ]