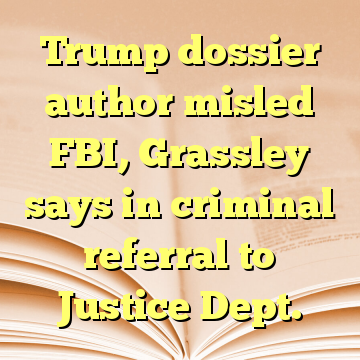 (Worthy News) – Christopher Steele, author of the infamous Trump-Russia dossier, misled the FBI into making false assertions to a judge to gain a wiretap on a Trump campaign volunteer, according to a Senate document released Tuesday evening.

The disclosure promises to tarnish further an FBI that was already under fire from Republicans for hiding the dossier’s Democratic financing.

The chain of events has to do with the Foreign Intelligence Surveillance Act (FISA) warrant issued by a judge on Oct. 21, 2016, to spy on Carter Page. [ Source: Washington Times (Read More…) ]