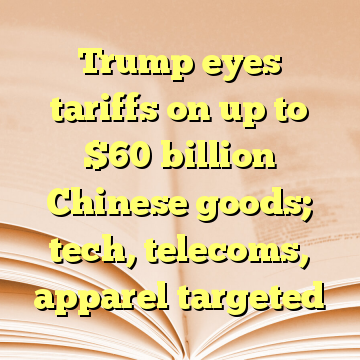 (Worthy News) – U.S. President Donald Trump is seeking to impose tariffs on up to $60 billion of Chinese imports and will target the technology and telecommunications sectors, two people who had discussed the issue with the Trump administration said on Tuesday.

A third source who had direct knowledge of the administration’s thinking said the tariffs, associated with a “Section 301” intellectual property investigation, under the 1974 U.S. Trade Act begun in August last year, could come “in the very near future.”

While the tariffs would be chiefly targeted at information technology, consumer electronics and telecoms, they could be much broader and the list could eventually run to 100 products, this person said. [ Source: Reuters (Read More…) ]