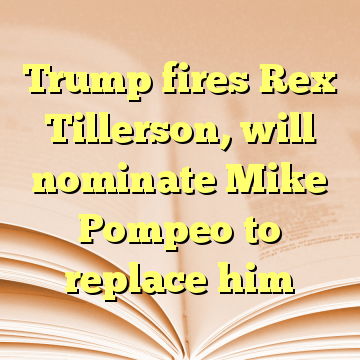 Trump announced via Twitter that Pompeo will do “a fantastic job,” and that Gina Haspel will become the new CIA director.

The Washington Post reported Tuesday that Trump asked Tillerson to step aside on Friday, but other reports say the secretary of state learned the news over Twitter. Tillerson thus cut his trip to Africa short to return to Washington. However, State Department spokesman Steve Goldstein said in a statement that Tillerson “did not speak to the President (prior to his firing) and is unaware of the reason.” [ Source: Washington Times (Read More…) ]