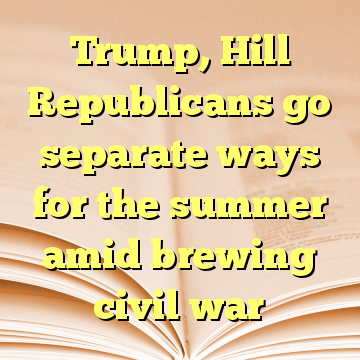 (Worthy News) – President Trump and the Republican Congress went their separate ways for the summer on Thursday amid an escalating GOP civil war fueled by mutual distrust and frustration.

Trump is chafing at what he views as his subordinates in Congress failing to repeal Obamacare even as they worked against him with Democrats to pass legislation limiting his ability to cut deals with Russia — a major embarrassment for the self-styled master negotiator.

Republicans are fed up with daily distractions from a chaotic White House and a president who complains but they feel won’t get his hands dirty, seemingly preferring to brag about his personal brand on Twitter than committing the full weight of his leadership to passing big legislation — like healthcare reform. [ Source (Read More…) ]