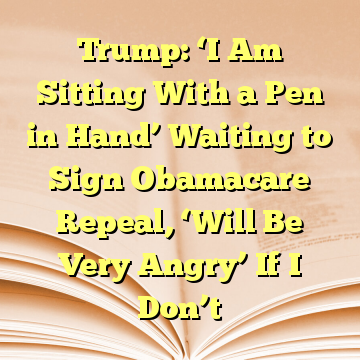 (Worthy News) – President Donald Trump said “I am sitting in the Oval Office with a pen in hand” waiting to repeal Obamacare in an interview Wednesday with CBN’s Pat Robertson.

Trump noted that Republican senators have been promising to repeal Obamacare for years, voting to do so over dozens of times when it “didn’t mean anything,” as Barack Obama was never going to repeal his signature domestic achievement.

“Now we have a president that’s waiting to sign it,” Trump said. “I have [a] pen in hand so now it means something. You know, those other times, those many, many times that they passed it, it didn’t mean anything.”

Robertson asked what would happen if they didn’t repeal the law.

“I will be very angry about it, and a lot of people will be very upset,” he said. “I hope that they do it. They’ve been promising it for years.”