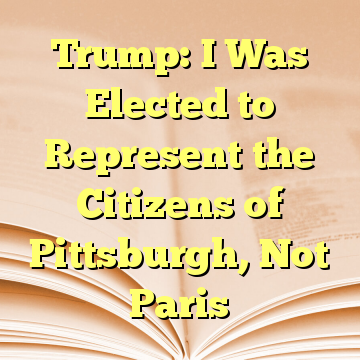 (Worthy News) – President Trump said he was elected to represent the citizens of “Pittsburgh, not Paris,” during remarks Thursday explaining his decision to withdraw the U.S. from the Paris climate agreement.

“We want fair treatment for our taxpayers,” he said. “We don’t want other leaders and other countries laughing at us anymore, and they won’t be. They won’t be. I was elected to represent the citizens of Pittsburgh, not Paris.”

Trump appeared to name-drop Pittsburgh because of its historic ties to the coal and manufacturing industries. [ Source ]

Liberals and environmentalists on Twitter reacted angrily to the news that President Donald Trump would be pulling out of the Paris climate accords.

Former President Barack Obama signed the accords in 2016, pledging to cut U.S. greenhouse gas emissions by 26-28 percent below 2005 levels by 2025. But various outlets reported early in the week that Trump planned to withdraw from the international agreement.

Even before Trump officially made the announcement on Thursday, reactions ranged from angry to apocalyptic. [ Source ]

Climate Expert Praises Trump for Pulling Out of ‘Sham’ Paris Accord

“I’m glad that Trump had the fortitude to stick it out despite all the attempts to waylay him,” said Dr. Tim Ball, a retired climatologist at the University of Winnipeg and author of “The Deliberate Corruption of Climate Science.”

“He didn’t have to rely on the false science,” Ball told WND and Radio America. “He relied strictly on the economics of it, that it’s a very, very bad deal for the United States. In fact, it’s deliberately designed to punish the United States.”

Ball said the Paris climate accord was simply the latest incarnation of the old Kyoto Protocol from the 1990s that sought to redistribute wealth from the industrial nations. He contends the Green Climate Fund, which is part of the Paris agreement, is the latest effort in that regard. [ Source ]