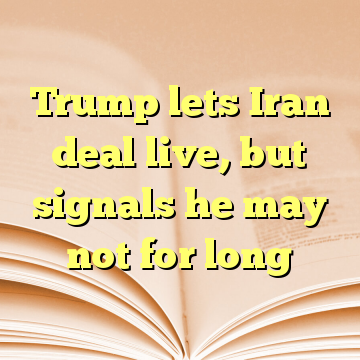 (Worthy News) – President Donald Trump was eager to declare Iran in breach of the nuclear deal but was talked out of it by national security aides who rushed to the Oval Office to persuade him as a midnight deadline approached, administration officials say.

Trump agreed let the issue go, but only for a few more months – and only after last-minute changes to distance Trump further from the deal.

Rather than say, as planned, that Iran was living up to its end of the deal, Trump’s aides found a way late Monday to let the deal continue for now without technically confirming that Iran is complying. The administration followed up the announcement with new, non-nuclear sanctions on Iranians on Tuesday to show Trump is indeed serious about confronting Tehran. [ Source: Washington Times (Read More…) ]