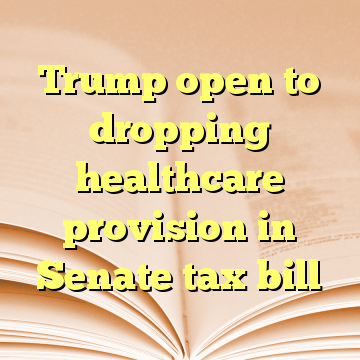 (Worthy News) – U.S. President Donald Trump would not insist on including repeal of an Obama-era health insurance mandate in a bill intended to enact the biggest overhaul of the tax code since the 1980s, a senior White House aide said on Sunday.

“If we can repeal part of Obamacare as part of a tax bill … that can pass, that’s great,” White House budget director Mick Mulvaney said on CNN’s “State of the Union” on Sunday. “If it becomes an impediment to getting the best tax bill we can, then we are OK with taking it out.” [ Source (Read More…) ]