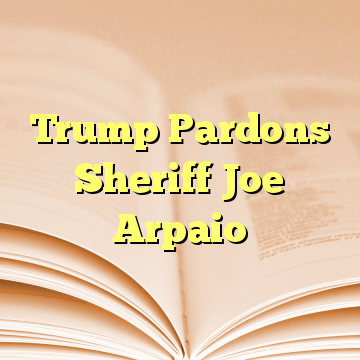 Arpaio had been found guilty of criminal contempt last month for disregarding a court order in a racial profiling case, CNN reports.

In a press release from the office of the press secretary, the White House said “Arpaio’s life and career, which began at the age of 18 when he enlisted in the military after the outbreak of the Korean War, exemplify selfless public service. After serving in the Army, Arpaio became a police officer in Washington, D.C. and Las Vegas, NV and later served as a Special Agent for the Drug Enforcement Administration (DEA), formerly the Bureau of Narcotics. After 25 years of admirable service, Arpaio went on to lead the DEA’s branch in Arizona.”

The statement commended Arpaio’s “life’s work of protecting the public from the scourges of crime and illegal immigration,” and said, “Sheriff Joe Arpaio is now eighty-five years old, and after more than fifty years of admirable service to our Nation, he is a worthy candidate for a Presidential pardon.” [ Source (Read More…) ]