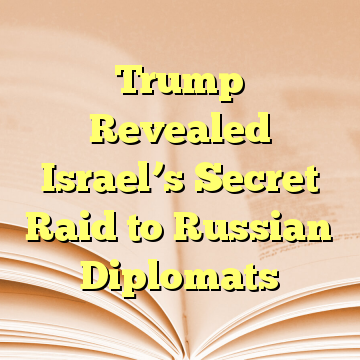 (Worthy News) – The intelligence that President Donald Trump leaked to top Russian officials in an Oval Office meeting in May concerned a highly sensitive Israeli special forces mission, it has been revealed. The operation, which took place in February 2017, involved commandos infiltrating an area under the control of the Islamic State militant group (ISIS), to place a surveilance device. The intelligence obtained through the device prompted a short-term ban on laptops on flights from several majority-Muslim countries to the US and the UK.

The target of the operation, according to a Vanity Fair report published on Wednesday, was an ISIS cell attempting to recreate a weapon developed by a top Al-Qaeda bombmaker. The weapon consisted of an explosive device that could be concealed inside a laptop and smuggled past airport security checks, raising the spectre of high-casualty attacks against civilian airlines.

Trump’s disclosure at the May 10 meeting with Russian Foreign Minister Sergei Lavrov and Russia’s then-ambassador to Washington Sergei Kislyak has been widely publicised at the time, but details of the operation itself have not previously been disclosed. In particular, Trump is alleged to have revealed the name of the city where the operation took place, leading to fears that the source who alerted the Israelis to ISIS’s intentions may be compromised. [ Source: Newsweek (Read More…) ]