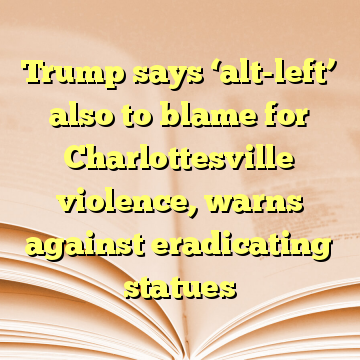 (Worthy News) – A defiant President Trump doubled down Tuesday on his initial claim that activists on both the left and the right were responsible for violence at a white nationalist rally in Charlottesville, Virginia, and he warned that eradicating public monuments linked to slavery could diminish the legacies of Founders such as George Washington and Thomas Jefferson.

Defending his first, roundly criticized assessment that “many sides” were guilty of violence during Saturday’s clashes, the president said he didn’t single out white supremacists initially because he didn’t have all the facts at the time and didn’t want to rush to judgment for the sake of political correctness.

“I wanted to make sure, unlike most politicians, that what I said was correct,” the president said. “Unlike the media, before I make a statement, I like to know the facts.”

But Mr. Trump also said at a contentious news conference at Trump Tower in New York that leftists committed much of the violence, while the media blamed only the “alt-right” movement. [ Source (Read More…) ]