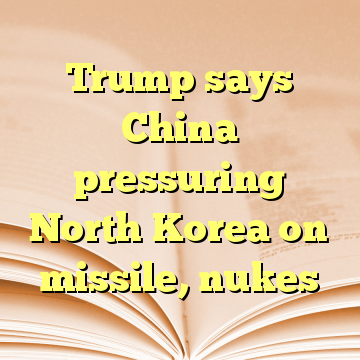 (Worthy News) – President Donald Trump said in a television interview to be aired Sunday that he believes China’s president has been putting pressure on North Korea as it pursues its missile and nuclear weapons programs.

In an interview with CBS’ “Face the Nation,” Trump said he won’t be happy if North Korea conducts a nuclear test and that he believes Chinese President Xi Jinping won’t be happy, either.

On Saturday, a North Korean mid-range ballistic missile apparently failed shortly after launch, South Korea and the United States said, the third test-fire flop just this month but a clear message of defiance as a US supercarrier conducts drills in nearby waters. [ Source ]