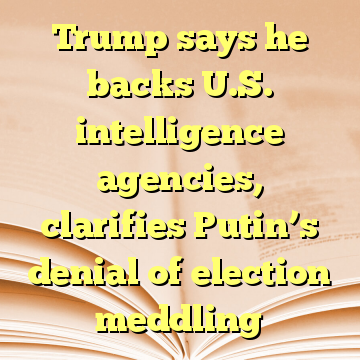 (Worthy News) – President Trump clarified Sunday that he believes the assessment of U.S. intelligence agencies that Russia meddled in last year’s presidential election, but also said he believes Russian President Vladimir Putin is “sincere” in his denials of interference.

“I believe that he feels that he and Russia did not meddle in the election,” Mr. Trump said of Mr. Putin at a news conference in Hanoi with Vietnam’s president. “As to whether I believe it, I’m with our agencies. As currently led by fine people, I believe very much in our intelligence agencies.”

On Saturday, Mr. Trump said the former heads of the FBI, the CIA and the Office of the Director of National Intelligence were “hacks” whose judgment he questioned on the matter of Russian meddling. The president, who now has new people heading all three agencies, said Sunday that he has worked “very strongly” with the new leadership in U.S. intelligence. [ Source: Washington Times (Read More…) ]