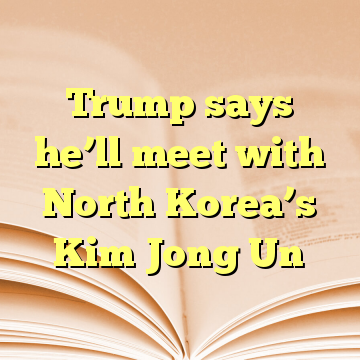 (Worthy News) – After months of trading insults and threats of nuclear annihilation, President Donald Trump agreed to meet with North Korean leader Kim Jung Un by May to negotiate an end to Pyongyang’s nuclear weapons program, South Korean and U.S. officials said Thursday. No American president has ever met with a North Korea leader.

The South Korean national security director, Chung Eui-yong, told reporters outside the White House of the planned summit, after briefing Trump and other top U.S. officials about a rare meeting with Kim in the North Korean capital on Monday.

The meeting would be unprecedented during seven decades of animosity between the U.S. and North Korea. The countries do not even have formal diplomatic relations. They remain in a state of war because the 1950-53 Korean War ended with an armistice and not a peace treaty. [ Source: Washington Times (Read More…) ]