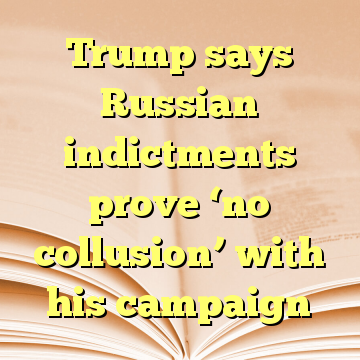 (Worthy News) – President Trump said Friday that the indictments against 13 Russians for interfering in the 2016 presidential election show that his campaign didn’t collude with Moscow, and that he beat Hillary Clinton fair and square.

“Russia started their anti-US campaign in 2014, long before I announced that I would run for President,” Mr. Trump tweeted. “The results of the election were not impacted. The Trump campaign did nothing wrong – no collusion!”

In announcing the indictments, Deputy Attorney General Rod Rosenstein said the Russian operation was aimed at benefiting Mr. Trump’s candidacy, but said there’s no evidence presented at this time to show that any Americans intentionally helped the scheme. [ Source: Washington Times (Read More…) ]