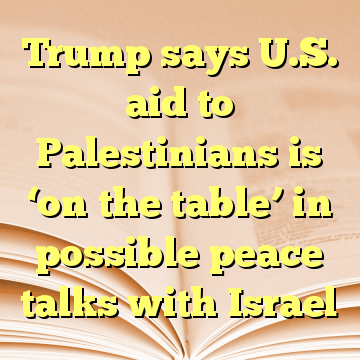 (Worthy News) – President Trump vowed Thursday to block any new U.S. financial aid to the Palestinians until they agree to restart peace talks with Israel.

During a meeting with Israeli Prime Minister Benjamin Netanyahu on the sidelines of the economic summit in Davos, Switzerland, Mr. Trump said his administration has prepared a “great proposal” for the Palestinians on a comprehensive peace deal. But the harsh reaction to his decision to recognize Jerusalem as Israel’s capital, including a snub of Vice President Mike Pence on his recent tour of the region, had put any U.S.-backed diplomatic initiative on hold, he said.

“We have a proposal for peace,” Mr. Trump said. “It covers a lot of the things that were, over the years, discussed and agreed on.” [ Source (Read More…) ]