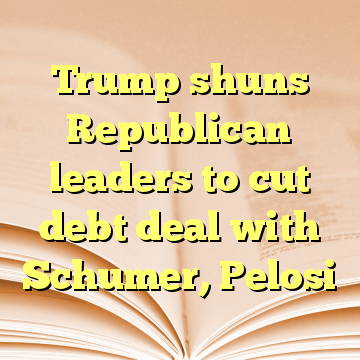 (Worthy News) – President Trump and Democratic leaders on Wednesday did what Washington does best: striking a bipartisan deal to boost borrowing and spending, keeping the government running into the next fiscal year and speeding disaster relief to Texas and Florida.

Mr. Trump accepted the deal offered by House Minority Leader Nancy Pelosi and Senate Minority Leader Charles E. Schumer at a White House meeting, seeing it as a chance to get ahead of a series of pressing fiscal problems that needed to be fixed this month.

Under terms of the deal, the government will operate on stopgap funding through Dec. 15, avoiding a shutdown showdown at the end of the month. The Treasury Department will gain more room to borrow through mid-December, averting a potential default on obligations. And relief efforts for Hurricane Harvey will receive an immediate infusion of cash. [ Source (Read More…) ]