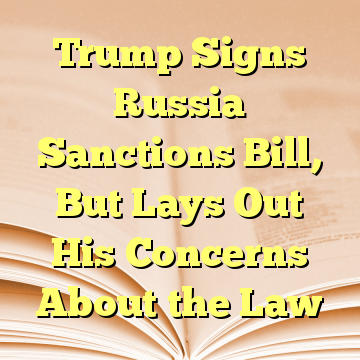 (Worthy News) – President Donald Trump signed a Russia sanctions bill Congress forced on him, adding a statement saying the administration will carry out the law but with reservations about its impact and the constitutionality of some provisions.

In a statement Wednesday accompanying the notice that he signed into law the legislation, which also targets Iran and North Korea, Trump laid out a list of concerns. He said it encroaches on presidential authority, may hurt U.S. ability to work with allies and could have unintended consequences for American companies.

“While I favor tough measures to punish and deter aggressive and destabilizing behavior by Iran, North Korea, and Russia, this legislation is significantly flawed,” the statement released by the White House said. [ Source:Bloomberg (Read More…) ]