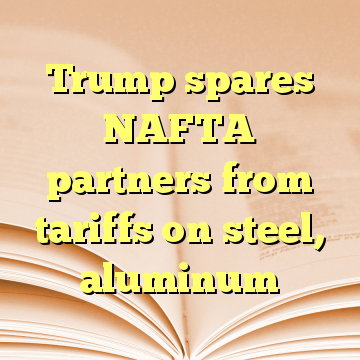 (Worthy News) – President Trump ordered tariffs Thursday on foreign steel and aluminum, brushing aside objections in his own party but sparing Canada and Mexico temporarily while the U.S. pushes its neighbors for a more favorable free trade deal.

In a meeting with factory workers at the White House, Mr. Trump said the tariffs of 25 percent on steel and 10 percent on aluminum keep his campaign pledge to rescue domestic industries and to protect national security. The new taxes on imports will take effect March 23.

“The actions we are taking today are not a matter of choice; they are a matter of necessity for our security,” Mr. Trump said as he signed two proclamations in the Roosevelt Room. [ Source: Washington Times (Read More…) ]