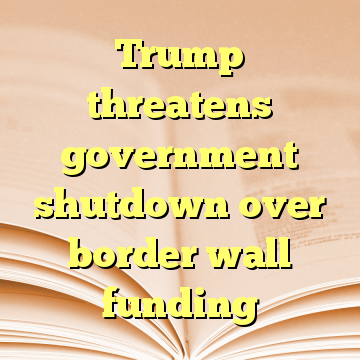 (Worthy News) – President Trump on Tuesday threatened to shut down the federal government if Congress doesn’t present him with a spending bill for the next fiscal year that includes funding for a wall on the southern border.

“The obstructionist Democrats would like us not to do it, but believe me, if we have to close down our government, we’re building that wall,” Trump said at a rally in Phoenix.

Trump reiterated his message that he was elected to help boost national security and keep illegal immigrants out of the country, many of whom he said are dangerous. He noted that he’s met with several families who have lost loved ones due to violence by illegal immigrants.

“I promised these families the deaths of their loved ones will not have been in vain,” he said. [ Source (Read More…) ]

Turning to immigration made sense for the administration, which has already notched significant gains. Apprehensions of illegal immigrants on the border — a rough yardstick for the overall illegal flow — are down dramatically across the Southwest, while deportations from the interior of the U.S. are up 32 percent.

Those gains were achieved by policy changes. But officials said if they are to be improved, it will take more resources, including another round of wall-building, and agents.

“The president’s message is we need a strong border and we need strong interior enforcement. What he’s done so far has worked, so we need the funding to make it permanent. We need funding to build a wall,” Thomas Homan, acting director of U.S. Immigration and Customs Enforcement, told reporters traveling with Mr. Trump. [ Source (Read More…) ]