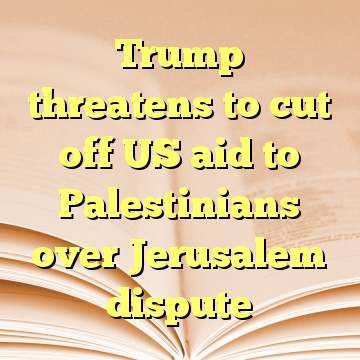 (Worthy News) – Acknowledging his push to broker peace in the Middle East has stalled, US President Donald Trump on Tuesday threatened to cut off aid to the Palestinian Authority, asking why Washington should make “any of these massive future payments” when the Palestinians were “no longer willing to talk peace.”

In a tweet, the president dismissed Palestinian fury over his recognition of Jerusalem as Israel’s capital, saying he had planned for Israel “to pay” in future negotiations for his declaration. But Palestinian intransigence was now preventing any progress on peace talks, he said.

Washington was paying the Palestinian Authority hundreds of millions of dollars a year “for nothing,” he wrote, complaining that the US received “no appreciation or respect” in return.