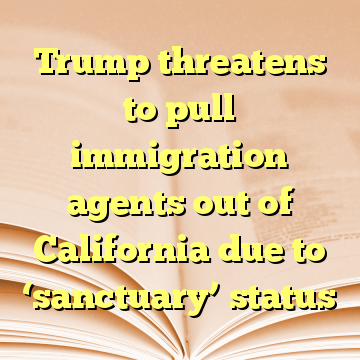 (Worthy News) – President Trump voiced frustration Thursday with California’s status as a statewide sanctuary for illegal immigrants, including gang members, and said he’s considering pulling federal immigration enforcement agents out of the state as a response.

“If we ever said, ‘Hey, let California alone let them figure it out for themselves,’ in two months they’d be begging for us to come back,” the president said during a White House meeting on law enforcement issues. “They would be begging. And you know what? I’m thinking about doing it.”

California last month became a “sanctuary state” where police are barred from asking people about their immigration status or participating in federal immigration enforcement actions in most cases. [ Source: Washington Times (Read More…) ]