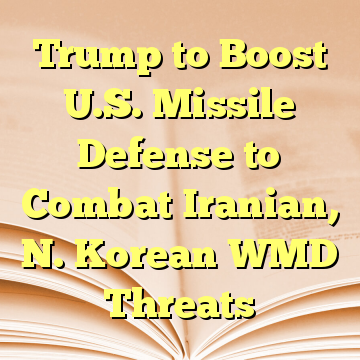 (Worthy News) – The Trump administration will designate domestic U.S. missile defense as a “priority action” as part of its forthcoming National Security Strategy, or NSS, according to draft language viewed by the Washington Free Beacon that singles out Iranian and North Korean missile threats as a direct danger to the American homeland.

Trump’s national security vision, which will be presented later Monday in the NSS, will focus in part on enhanced missile defense in the United States in order to combat possible attacks by North Korea and Iran on the American homeland, according to draft portions of the NSS exclusively viewed by the Free Beacon.

The focus on missile defense comes as Iran and North Korea work independently—and in conjunction—to boost the power and range of their missiles, particularly their intercontinental ballistic missiles, which are capable of carrying a nuclear warhead. [ Source: Washington Free Beacon (Read More…) ]