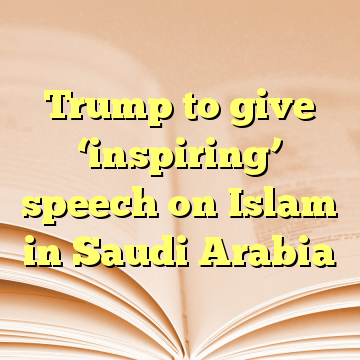 (Worthy News) – US President Donald Trump will urge unity between the world’s major faiths on an ambitious first foreign trip that will take him to Saudi Arabia, the Vatican and Jerusalem, the White House said Tuesday.

National Security Adviser H.R. McMaster laid out a detailed itinerary for the “historic trip,” due to start late this week, and confirmed that Trump would address a gathering of Muslim leaders on his “hopes for a peaceful vision of Islam.”

“He will meet and have lunch with leaders of more than 50 Muslim countries, where he will deliver an inspiring, direct speech on the need to confront radical ideology and the president’s hopes for a peaceful vision of Islam,” McMaster said. [ Source ]