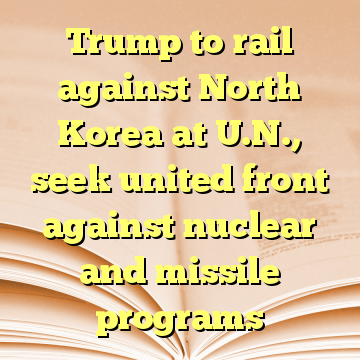 (Worthy News) – President Trump will turn up the heat on North Korea and call out countries that coddle the rogue regime Tuesday in his first address to the United Nations General Assembly, said a senior White House official who recognized that the threat of war loomed over the speech.

The United Nations has exhausted nearly all diplomatic and economic sanctions it can impose and the military option terrifies the world, but foreign policy analysts said Mr. Trump has a golden opportunity to present a united front — most importantly with China and Russia — for whatever comes next.

That would send a powerful message to Pyongyang, which has accelerated its nuclear and missile programs in an effort to intimidate its neighbors and the U.S.

“He will speak in extremely tough terms about the North Korean menace, and the threat it poses to our security and the security of all the nations in that room,” said the official, who described the speech to reporters on the condition of anonymity. “He will talk about as well the enablement of the North Korean regime and what that means, too.” [ Source: Washington Times (Read More…) ]