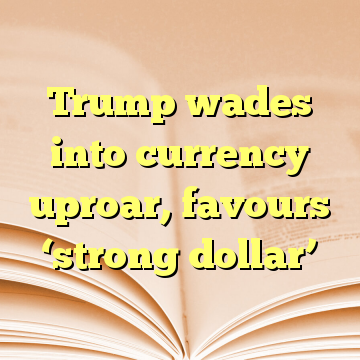 (Worthy News) – President Donald Trump waded into the uproar over the US currency on Thursday (Jan 25), saying he wants to see “a strong dollar,” countering comments by his treasury secretary that appeared to signal the opposite and sent the greenback plunging to three-year lows.

It was an inauspicious start to Trump’s first foray as president onto the glitzy global stage at the World Economic Forum in Davos, Switzerland, as he was forced into damage control mode to calm skittish foreign exchange markets.

Trump told CNBC that remarks a day earlier by Treasury Secretary Steven Mnuchin, which seemed to favor a weak dollar to help US exporters, “were taken out of context.” [ Source: Channel News Asia (Read More…) ]