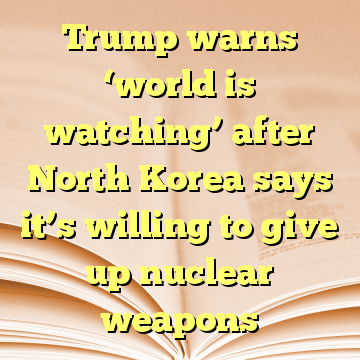 (Worthy News) – President Trump said on Tuesday said “the world is watching” North Korea after the regime promised not to use nuclear or conventional weapons against Seoul and expressed a willingness to hold talks with the United States on denuclearization.

“Possible progress being made in talks with North Korea. For the first time in many years, a serious effort is being made by all parties concerned. The World is watching and waiting! May be false hope, but the U.S. is ready to go hard in either direction!” Trump tweeted. [ Source: Fox News (Read More…) ]