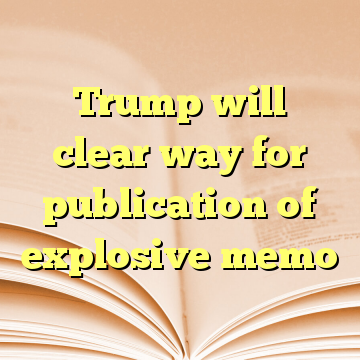 (Worthy News) – Over the strong objections of his own Justice Department, President Donald Trump will clear the way for the publication of a classified memo on the Russia investigation that Republicans say shows improper use of surveillance by the FBI, White House officials said Thursday.

The memo, prepared by Republicans on the House intelligence committee, is said to allege FBI misconduct in the initial stages of its investigation of potential ties between Russia and Trump’s 2016 campaign. Trump’s Justice Department and Democrats furiously lobbied Trump to stop the release, saying it could harm national security and mislead the public.

A White House official said Congress would probably be informed of the decision Friday, adding Trump was “OK” with its release. A second White House official said Trump was likely to declassify the congressional memo but the precise method for making it public was still being figured out. The officials were not authorized to be quoted about private deliberations and spoke on condition of anonymity. [ Source: Times of Israel (Read More…) ]