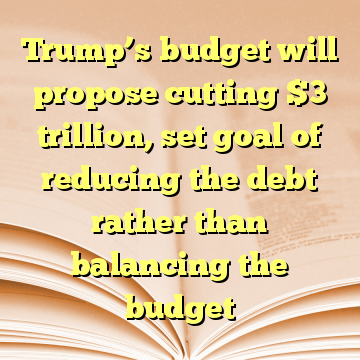 Instead of balancing the budget, the Trump administration will tout lowering the debt relative to the economy in its budget document, to be released Monday.

“As a nation, we face difficult times – challenged by a crumbling infrastructure, growing deficits, rogue nations, and irresponsible Washington spending,” Office of Management and Director Mick Mulvaney said in a statement Sunday evening. “Through this budget proposal, it is clear that the President and this Administration are determined to reverse these trends, and ensure greater prosperity for the hard-working American taxpayer.” [ Source: Washington Examiner (Read More…) ]