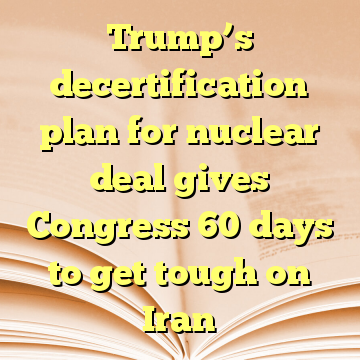 (Worthy News) – The U.S. plans to remain in the nuclear deal with Iran but will push to make sure Tehran lives up to its end of the bargain, administration officials said Sunday, as President Trump asks Congress for help in beefing up an international pact he once derided as “the worst deal ever.”

Mr. Trump announced Friday that he was decertifying the deal signed by President Obama but stopped short of ending the international agreement. Instead, he gave lawmakers 60 days to take a tougher approach toward Iran’s lawless behavior.

“We will not continue down a path whose predictable conclusion is more violence, more terror and the very real threat of Iran’s nuclear breakout,” Mr. Trump said. “Iran is not living up to the spirit of the deal.” [ Source: Washington Times (Read More…) ]