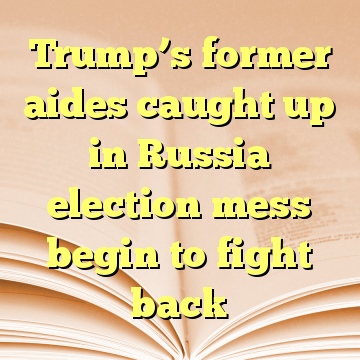 (Worthy News) – Former campaign aides to President Trump have begun to fight back against what they consider libelous allegations in the Russia election saga.

Instead of expensive legal actions, they are representing themselves in what might be considered unconventional actions through court, ethics and FBI complaints. The aim is to clear their names of any involvement in Russian election interference, as alleged by online bloggers, the press and Democrats.

Michael Caputo, a Trump campaign communication adviser, has filed a complaint with the Office of Congressional Ethics against Rep. Jackie Speier, California Democrat. At a House intelligence committee hearing in March, she asserted that Mr. Caputo was Vladimir Putin’s “image consultant.” Mr. Caputo says the claim is false. She later accused him of lying under oath.

“We live in fear,” he said of he and his family after Mrs. Speier’s charges prompted scores of social media threats. [ Source (Read More…) ]