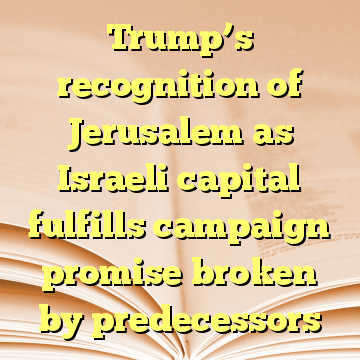 (Worthy News) – In a dramatic shift from his predecessors, President Trump announced Wednesday that the U.S. is recognizing Jerusalem as the capital of Israel and ordered plans to move the U.S. Embassy from Tel Aviv to the ancient, divided city.

The move fulfills a campaign promise to religious conservatives, a pledge that other presidents broke routinely. But Mr. Trump’s decision also could inflame tensions across the Middle East because Palestinians want to establish their capital in east Jerusalem.

“It is time to officially recognize Jerusalem as the capital of Israel,” Mr. Trump said in an 11-minute speech at the White House. “It also is the right thing to do.” [ Source: Washington Times (Read More…) ]