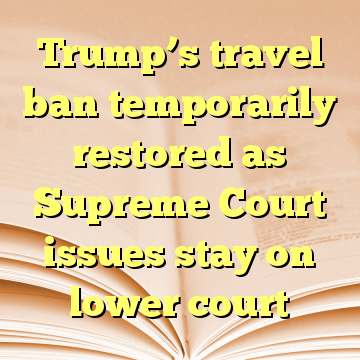 (Worthy News) – The Supreme Court on Monday temporarily restored part of President Trump’s travel ban, potentially blocking up to 24,000 refugees from being able to enter the U.S.

Justice Anthony M. Kennedy, acting on a request from the Justice Department, stayed a ruling issued last week by the 9th U.S. Circuit Court of Appeals, which said Mr. Trump had drawn too tight a circle in deciding who was exempt from the travel ban.

His ruling allows the Trump administration’s halt on refugee admissions to take effect, even as the high court considers the case more fully. He ordered the travel ban opponents to file their briefs by noon Tuesday. [ Source (Read More…) ]