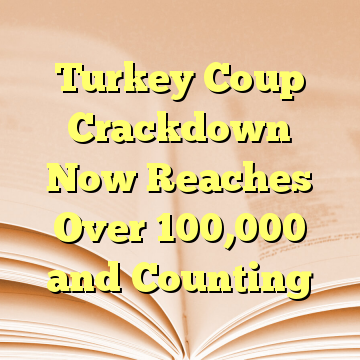 (Worthy News) – The scale of Turkey’s crackdown on alleged government opponents following last year’s attempted coup was confirmed by a top official, as the nation prepares to mark the anniversary of the failed putsch amid deepening concern over the rule of law, Bloomberg reported.

Authorities have fired 103,824 state employees and suspended 33,483 more since the July 15 bid to seize power by a section of the military, Deputy Prime Minister Numan Kurtulmus said in an interview. The purge of suspected followers of U.S.-based cleric Fethullah Gulen, accused by the government of orchestrating the coup attempt, is necessary to ensure national security, he said.

Judicial bodies have processed the cases of 168,206 people linked to the takeover attempt, the Justice Ministry said. About 48,000 have been released from custody but remain under court monitoring, it added. [ Source: Bloomberg ]