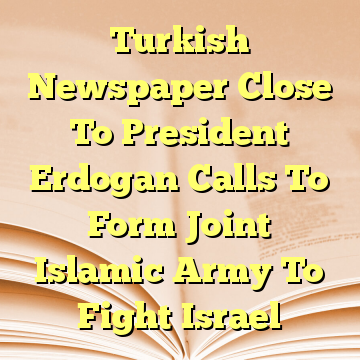 (Worthy News) – On December 12, 2017, ahead of the summit of the Organization of Islamic Cooperation (OIC) in Istanbul, the Turkish daily Yeni Şafak, which is close to President Recep Tayyip Erdoğan and his ruling AKP party, published an article titled “A Call for Urgent Action,”[1] which also appeared on the paper’s website under the title “What If an Army of Islam Was Formed against Israel?”[2]

The article called on the 57 member states of the OIC to form a joint “Army of Islam” to besiege and attack the state of Israel. It notes that such a joint army will greatly exceed the Israeli army in manpower, equipment and budget, and presents statistics to prove this. It also advocates establishing joint bases for the army’s ground, air and naval forces that will arrive from all over the Muslim world to besiege Israel, while noting that Pakistan, as the only nuclear country, has “a special status” among the OIC countries.

An interactive map provides information on military forces stationed in various locations and the role they can play in the potential joint Muslim attack on Israel.