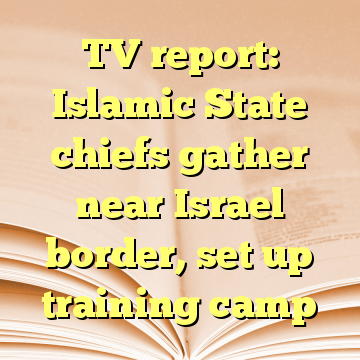 (Worthy News) – Several senior commanders from Islamic State who recently fled from Iraq and northern Syria are now based in southern Syria, just across the Golan Heights border with Israel, and are training hundreds of new recruits there, an Israeli television report said.

Israel’s Channel 2 said the commanders have made their way to an Islamic State-controlled enclave “close to the border” with Israel. They have set up a training camp to which they have recruited 300 local youths, said the report, which showed footage apparently of the camp and training sessions.

Among the commanders is one of Islamic State’s most notorious recruiters, Abu Hamam Jazrawi, the TV report said. [ Source: Times of Israel (Read More…) ]