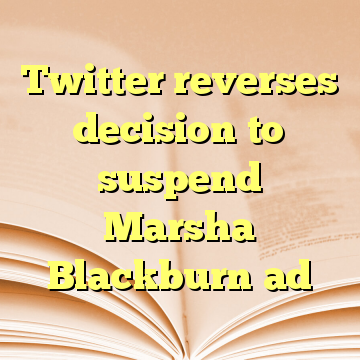 (Worthy News) – Twitter has backtracked its initial position and is no longer suspending an ad from Tennessee Senate candidate Rep. Marsha Blackburn, after “reconsidering the ad in the context of the entire message.”

“Our ads policies strive to balance protecting our users from potentially distressing content while allowing our advertisers to communicate their messages. Nowhere is this more difficult than in the realm of political advertising and the highly charged issues that are often addressed therein,” said Twitter spokesman Nicholas Pacilio in a statement Tuesday.

“After further review, we have made the decision to allow the content in question from Rep. Blackburn’s campaign ad to be promoted on our ads platform,” the statement continued. “While we initially determined that a small portion of the video used potentially inflammatory language, after reconsidering the ad in the context of the entire message, we believe that there is room to refine our policies around these issues. We have notified Rep. Blackburn’s campaign of this decision.” [ Source: Washington Examiner (Read More…) ]