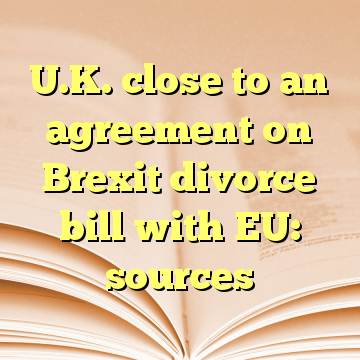 (Worthy News) – Britain has offered to pay much of what the European Union was demanding to settle a Brexit “divorce bill,” bringing the two sides close to agreement on a key obstacle to opening talks on a future free trade pact, EU sources said on Tuesday.

The offer, which British newspapers valued at around 50 billion euros, reflected the bulk of outstanding EU demands that include London paying a share of post-Brexit EU spending on commitments made before Britain leaves in March 2019 as well as funding of EU staff pensions for decades to come.

A British government official said they “do not recognise” this account of the talks going on ahead of a visit by Prime Minister Theresa May to Brussels this coming Monday. [ Source: Globe and Mail (Read More…) ]