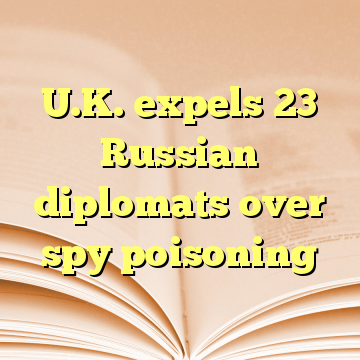 (Worthy News) – Britain will expel nearly two dozen Russian diplomats, sever high-level bilateral contacts with Moscow and take both open and covert action against Kremlin meddling after the poisoning of a former spy, the prime minister said Wednesday, plunging U.K.-Russian relations into their deepest freeze since the Cold War.

Prime Minister Theresa May told lawmakers that 23 Russian diplomats who have been identified as undeclared intelligence officers have a week to leave the country.

May spoke after Moscow ignored a midnight deadline to explain how a nerve agent developed by the Soviet Union was used against Sergei Skripal, an ex-Russian agent convicted of spying for Britain, and his daughter Yulia. They remain in critical condition in a hospital in Salisbury, southwestern England, after being found unconscious on March 4. [ Source: Washington Times (Read More…) ]