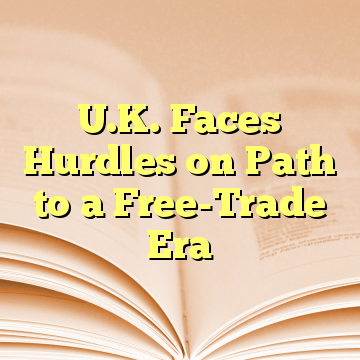 The EU has dozens of regional or bilateral free-trade agreements covering more than 60 countries. These stretch from broad, stand-alone deals with large economies like South Korea to looser partnerships with smaller neighbors, including Tunisia and Algeria.

Keeping most of these pacts alive after Britain leaves the EU in March 2019 is a strategic goal for the U.K., which has put expanding global trade at the center of its post-EU economic plan.

It is also important economically. Around 13% of U.K. trade is with countries covered by an EU trade deal, including 10 of the U.K.’s top 50 export markets. More than 40% is with the EU. Other big partners such as Canada and Japan are subject to accords with the EU that Brussels is implementing or finishing. [ Source: Wall St. Journal (Read More…) ]