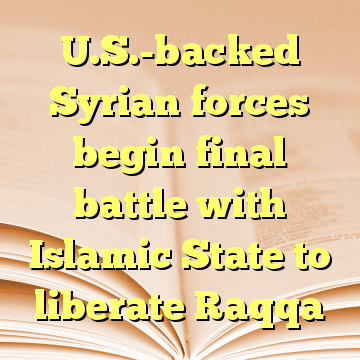 (Worthy News) – U.S.-backed Syrian forces launched the long-awaited assault on the Islamic State’s self-styled capital of Raqqa on Tuesday, marking what the Pentagon says will be the beginning of the end of the terrorist group’s hopes for a caliphate in its last major stronghold in the country.

The liberation of the northern Syrian city from three years of Islamic State domination likely will be one of the most brutal fights that the U.S.-backed coalition has faced since the war began in earnest in 2014.

The battle, coming as the U.S. and its allies are trying to clear out the last determined Islamic State resistance in the Iraqi city of Mosul, also will provide a window into the U.S. military’s fighting posture after President Trump vowed to remove what he said were restrictions imposed by the Obama administration in the fight against the Islamic State and other jihadi groups operating in Syria. [ Source ]