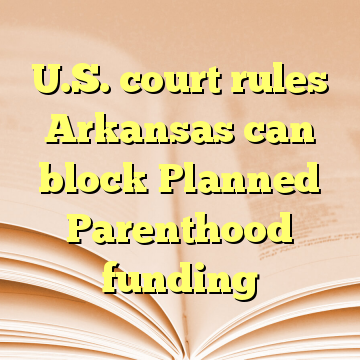 (Worthy News) – A U.S. appeals court on Wednesday reversed a ruling that prevented Arkansas from cutting off Medicaid funding to Planned Parenthood following the release of controversial videos secretly recorded by an anti-abortion group.

The 8th U.S. Circuit Court of Appeals in St. Louis reversed a ruling forbidding Arkansas from carrying through with Republican Governor Asa Hutchinson’s directive to suspend Medicaid reimbursements to a Planned Parenthood affiliate.

But by a 2-1 vote, a 8th Circuit said the provision of the Medicaid law the women relied on does not unambiguously create a federal right for individual patients that they could enforce in court. [ Source (Read More…) ]