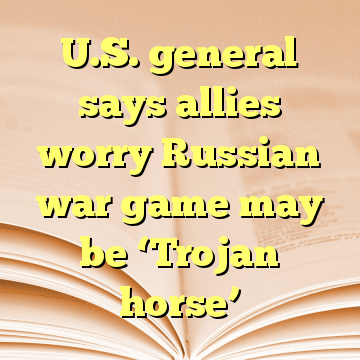 (Worthy News) – U.S. allies in eastern Europe and Ukraine are worried that Russia’s planned war games in September could be a “Trojan horse” aimed at leaving behind military equipment brought into Belarus, the U.S. Army’s top general in Europe said on Thursday.

Russia has sought to reassure NATO that the military exercises will respect international limits on size, but NATO and U.S. official remain wary about their scale and scope.

U.S. Army Lieutenant General Ben Hodges, who heads U.S. Army forces in Europe, told Reuters in an interview that allied officials would keep a close eye on military equipment brought in to Belarus for the Zapad 2017 exercise, and whether it was removed later.

“People are worried, this is a Trojan horse. They say, ‘We’re just doing an exercise,’ and then all of a sudden they’ve moved all these people and capabilities somewhere,” he said. [ Source:Reuters (Read More…) ]