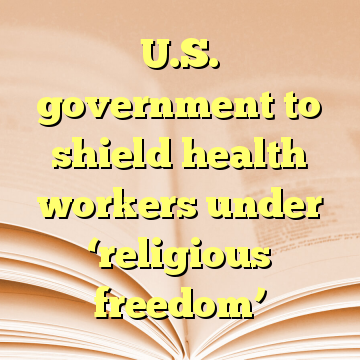 (Worthy News) – The U.S. government is seeking to further protect the “conscience and religious freedom” of health workers whose beliefs prevent them from carrying out abortions and other procedures, in an effort likely to please conservative Christian activists and other supporters of President Donald Trump.

The U.S. Department of Health and Human Services said on Thursday it will create a division within its Office of Civil Rights to give it “the focus it needs to more vigorously and effectively enforce existing laws protecting the rights of conscience and religious freedom.”

Healthcare workers, hospitals with religious affiliations, and medical students among others have been “bullied” by the federal government to provide these services despite existing laws on religious and conscience rights, the top HHS official said. [ Source: Reuters (Read More…) ]