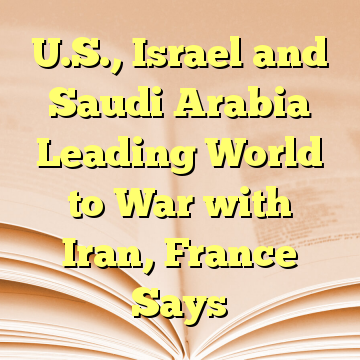 (Worthy News) – French President Emmanuel Macron has accused the U.S., Israel and Saudi Arabia of instigating a war as their mutual foe, Iran, was rocked by a week of protests.

Macron on Wednesday joined several other world leaders to weigh in on protests that began as demonstrations against austerity measures under Iranian President Hassan Rouhani and later spilled into isolated, deadly clashes between civilians and security forces. The French leader called for dialogue with Tehran and criticized three of his international partners for pursuing what he considered bellicose policies toward a country the trio have increasingly sought to isolate and undermine in recent years.

“The official line pursued by the United States, Israel and Saudi Arabia, who are our allies in many ways, is almost one that would lead us to war,” Macron told reporters, according to Reuters. [ Source: NewsWeek (Read More…) ]