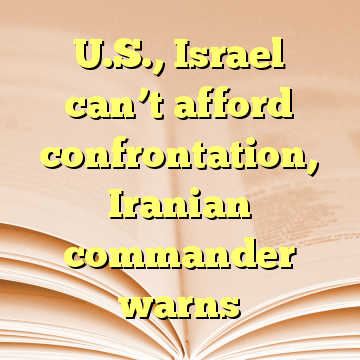 (Worthy News) – A senior Iranian commander has warned Israel and the United States that it cannot afford the costs of a confrontation with the Islamic Republic.

“At present, the development and deepening of Iran’s regional power has made any decision to confront the Islamic Republic difficult, which will be followed by unimaginable costs,” Maj.-Gen. Gholam Ali Rashid, who commands the Khatam al Anbia Central Headquarters, was quoted by Iran’s Fars News as saying on Sunday.

“Today, the Zionist regime has, more than the past, understood the Islamic Republic of Iran’s power in the region and will avoid testing it because it cannot manage confrontation against Iran and cannot bear its costs,” he added. [ Source (Read More…) ]