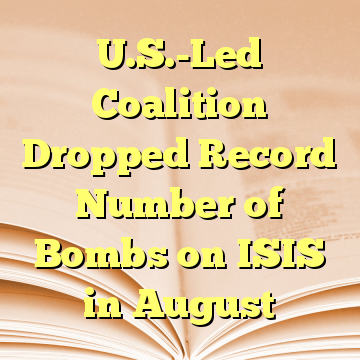 (Worthy News) – The U.S.-led coalition fighting the Islamic State dropped 5,075 bombs during operations in August, the highest total of any month since the three-year campaign against the terrorist group began.

Already in 2017, the coalition has “released” 32,801 weapons on ISIS, while in all of 2016, it only dropped 30,743 bombs. These numbers do not include the number of bombs dropped by aircraft not under Air Force Central Command’s control in Iraq and Syria.

The major uptick in strikes occurred after President Donald Trump took office. Trump had promised on the campaign trail to “bomb the hell out of ISIS,” criticizing the Obama administration for not doing more to fight the jihadist group. Trump’s secretary of defense, James Mattis, earlier this year requested $3.5 billion more for “preferred munitions” to bomb ISIS. [ Source (Read More…) ]